Can you help us transport two heavy-weight electrical substations for offshore wind farms from Poland to Denmark? No problem. Just another day at the office for Senior Project Manager Finn Petersen.

“I know exactly who to call and what to do when. It may seem a complicated transport because of the magnitude, but knowing the details to a successful ocean transport, makes all the difference”.

Finn Petersen knows his trade and speaks of transporting the two heavy-weight giants with a sense of ease that makes you believe him.

At the beginning of 2020, we received a request from Bladt Industries to transport two electrical substations from Gdynia and Gdansk in Poland to Aalborg, Denmark. A journey of approx. 410 nautical miles (760 km).

With a weight of 788 and 1080 tons, respectively, it takes a sizeable barge to do the job. Measuring 92,10(H) x 27,10(W) m (equal to the height of a regular 30 story building), we chartered two offshore towing barges, normally operating the North Sea, from shipping company Ugland Construction in Stavanger, Norway.

A specialized ballasting engineer flew in from Norway to de-ballast the barges enough to load the substations. Assisted by four SPTM vehicles and a chute, the substations were loaded and then welded onto the barges for safety.

During a 5 days journey, designated tugboats escorted the heavy-loaded barges from Gdynia and Gdansk to Denmark’s most northern commercial port, Aalborg, where they were immediately unloaded.

In Aalborg, pipes, wires, electrical installations, helicopter pads, and much more are installed before the substations’ final voyage to the North Sea and the Baltic Sea. The substations help transform wind power into electricity and will be part of two marine renewable energy projects off the Danish coast. At the final delivery in 2022, the substations’ weight will have increased to 2200 and 2700 tons, respectively.

Finn Petersen will head those transport, too. ‘Though their weight will have more than doubled, the task is the same; to deliver them safely to their points of installation out in the open sea.’

That’s how know-how and experience speak.

Can you help us transport two heavy-weight electrical substations for offshore wind farms from Poland to Denmark? No problem. Just another day at the office for Senior Project Manager Finn Petersen.

We design, execute and manage the delivery of project cargo globally and domestically. Small or large scale. At 2700 tons of HVDC units travelling over 18,262 kilometres, this heavy-lift transport was a mind-boggling distance and an equally mind-boggling heavy cargo. 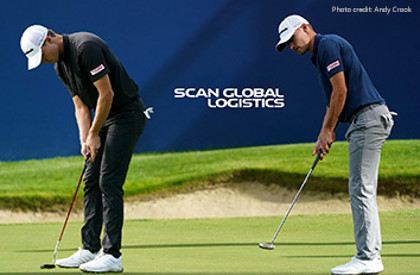 Scan Global Logistics, one of the fastest-growing companies within global transportation and logistics, has today announced a multi-year renewal with Danish golf stars Nicolai and Rasmus Højgaard.